Trailer Trash Barbie OG is an accidental cross made with Biker Kush and possibly White OG both from Karma Genetics. I am uncertain of the exact parentage which is why I chose this slightly deranged name for it.

I have been growing Biker Kush or HA OG as I like to call it for several years and it is a favorite of mine. Several years ago I was running HPS lights and since I am a closet grower and it was summer I was having heat issues even running at night. I decided to upgrade my 6″ exhaust fan to 8″ and ended up doing the upgrade during lights off.

The closet had my top 4 Biker Kush clones and a couple of my best White OG plants too. Well both strains had always been stable so I did not think the indirect daylight would be much of an issue but turns out I was wrong. It ended up a hermie grow.

I saved the seeds and marked which cut they came from. That was all I could do because it was impossible to tell who pollinated who.

Both these strains were pure fire. The White OG was pure gas with a touch of citrus and the Biker had a fantastic citrus OG thing going on. So I figured whichever way it went there would be sure to be some gems in those seeds.

Since the herm was pretty much forced I am not too worried about hermie issues but it is possible. The good thing is the seeds are all fem so no males taking up space. Not sure if they would be S1 or a BX.

Because I am unsure of the parentage I chose the name Trailer Trash Barbie  for all it entails and also because there was a hot fairly loose gal at one of the bars I hung out in that we nicknamed that or just called TTB as our private joke when she was around. Turns out she found out what TTB stood for and liked it! So if you live in a trailer park or your name is Barbie please dont be offended.

Any way I popped a couple of seeds and got 2 different phenos. One (#2) is a monster that roots in days has very vigorous growth and roots and the other (#1) is smaller and much harder to clone. So here’s a few pics.

I think #1 leans more towards the Biker and #2 towards the White OG but time will tell. I actually have quite a few seeds to test so it will take a while to pick the winners but it will be fun to see what’s there. I may do a few larger grows once I have a better idea of their quality and stability.

So here is a quick video of Trailer Trash Barbie OG #s 1 and 2 on day 6. I also have a clone of #2 going because it rooted and grew very fast. It should give me an idea if it comes true from clone.  Unfortunately TTB #1 was much harder to root so I did not have a clone of it ready to flower too.

Yes its true. Fem seeds are 99.9 % female but occaisonaly a male does pop up. I just found one 10 days into 12/12. I went to raise the light and low and behold TTGOG #1 was showing male flowers.

The plant was removed and I will try to save some pollen from it. Not sure if I will use it though.

This plant was really a PITA to root so I don’t think I will miss her/him but unfortunately that only leaves me with one plant of the strain in flower. I will have to pop a bunch more seeds to continue my pheno hunt and that is going to take some time. Meanwhile I am hoping the one I have will be fire. I will continue to update on that one. A few pics for you:

I went over this plant with a jewelers loupe and I didn’t see any pistils at all. Only male flowers. So I dont think it is a hermie but actually that rare male that occasionally pops up in feminized seed. I dont know if the pollen will even be viable. I dont know what the effects of breeding with it will be either but read somewhere breeders consider this valuable because it throws mostly female seeds in its progeny.

Well the male was a dud shooting blanks LOL! Male flowers but no pollen so he’s gone. That leaves me with only one plant to test for now but it looks like a winner so far. Next time I will be popping more seeds for sure. Here are day 21 pics:

I like this girl. She has good vigor and clones easily. Typical OG structure with upright, weak, floppy branches and fairly wide node spacing. She is already developing some nice trichomes. It’s still too early to pick up much of a smell from her.

I have a clone from her flowering too. Sometimes plants grow differently from clones than they do from seedlings. So far it looks like an exact knock off of its momma. More updates to come!

The one TTB OG I do have appears promising and it appears she clones true. Growth has been steady and the girls are healthy. Still not much of a smell yet. I still am not sure who the daddy is.

Most of the Biker Kush had a lot of 3 leaf blades and even some singles on top. It also will grow 3 blades with a stunted 4th leaf by the stem and so far I am not seeing that. I suspect because of that, easy cloning and fast growth it may have White OG in it.

Still it is a nice plant. I have a bunch more seeds to test so I am sure I will find the terp profile I am looking for if this one doesn’t have it.

Had to put up a second trellis because she was flopping over. Smells like Pine Sol. Quick video from my Instagram account where I update my grows daily. Check it out.

She’s tall and floppy so I had to add a 2nd screen to hold up the branches. Everything is good and I am starting to see some brown hairs. Some of that may be from bruising the buds due to having to move the tops into the screen.

Just a quick update on day 48.

Trailer Trash Barbie OG Day 52 Getting Her Ready For Flushing

It’s definitely time for a new update on my Trailer Trash Barbie. Today is day 52 and the girls were switched over to New Millenium Winter Frost on day 49. They will stay on that for a week and then I will start to flush them.

There are some Black Banana Cookies in the closet with her too. I am seeing yellowing on Barbie but the Black Banana seems less affected by the Winter Frost at this point.

The plant I have seems to be very close to my original Biker Kush #10 cut. She was tall and lanky and had an incredible smell to her. The smell on this one is very close and bud and plant structure are very similar.

The smell may change as she matures and cures. She has gone from pinesol to a gassy floral smell that is hard to describe. I am looking forward to getting these buds jarred. I also want to see what the other seeds from the #10 hold.

Here is the day 52 video and there’s a peek at some Grim Bastard OG at the end too.

Here are a few pics of TTBOG taken on day 52:

It has been a week since flush began and this girl will probably come down in the next few days. I am waiting for my Black Banana girls to finish. Barbie has faded fast just like she would in real life LOL. The other girls are taking a bit longer. I expect everything to come down within the week. These pictures are from the seed plant and the clone is very similar terp wise but has a slightly different bud structure.

The Trailer Trash Barbie and Black Banana all came down today. I would have liked to give them a bit longer to flush but I really needed to get their space ready for the next round.

Smells are great and Barbie had a great OG profile, very complex gas,lemon, citrus,pine and the Black Banana had a sweet smell combined with hints of OG.

I tried running some UVB bulbs as an experiment and I think it was a success. Plants seemed stickier and trichome production seemed better too.

I dont test for potency so I have no real way of knowing if they increased THC levels as claimed. But I think stickier, frostier buds are a good thing. So here is a quick video update:
https://youtu.be/iYtqVTltTyw day 63 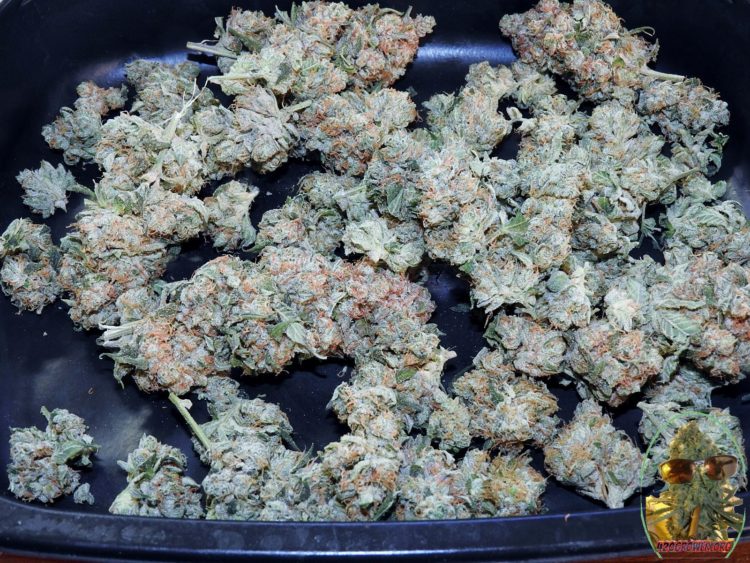 So Barbie turned out to be a good girl after all. I said good  not nice LOL! Good girls can still be fun but nice girls aren’t. She is frosty and has great terpines and she’s potent. Very much like my #10 cut she came from.

I have to conclude this girl is an S1. I dont believe any White OG pollen got to her. The only difference I can see is a slightly different bud structure on the clone. Otherwise she clones true. Same flavor,smell and plant structure.

She has a floral, citrus and OG smell that is hard to describe. Very resinous. It coats the inside of your mouth when you smoke her. Kind of a sour resin taste again hard to describe. At this point I will be keeping her.

I still have 22 seeds from my #10 cut and hopefully they are all similar. Idealy I want a clone with larger buds and a bit tighter bud structure so maybe I will find one.

Self Watering Planter Grow For…