How much LED light for weed is enough? Can you have too much light? I did not think it was possible myself but now I definitely know you can. 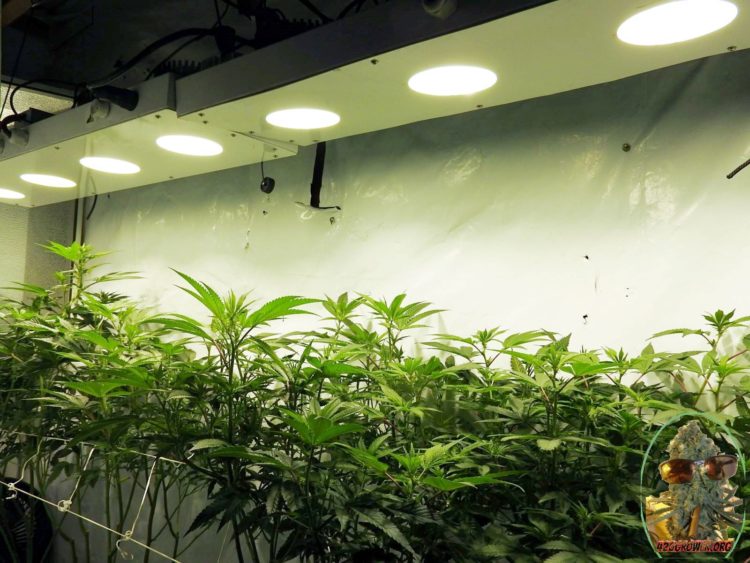 The video below is a comparison between my two flower closets. There are only 2 differences. One closet is on day 9 and the other on day 21. The only other difference was that one is getting 5oo watts of COB LED lighting and the other was getting 750. Watch the video and decide for yourself.

So I was running 750W of COB Led lighting. My closet is 6×3 and the screen I grow on is 2×4 – 2×5 depending on plant spread. I started noticing a few things. First inkling that something was wrong was small bud size. I also noticed top buds felt dry instead of sticky and trichome production was lower.

Plants were maturing earlier than normal but buds were small and bud hairs were turning brown way too early in my grow. One strain finished in 50 days instead of 60-70 days. Buds were nice, fade was great but size was lacking and I felt trichome and resin production were way off.

So what was going on? I take PAR readings and they were good except for a few very tall tops that were higher than the rest. I knew I had a problem so I started researching light levels for cannabis.

Unlike HPS lights, LEDs are unlikely to cause the same kind of heat stress. I have experienced bud bleaching with blurples but never with a COB LED. That doesn’t mean they can’t be damaging your buds and volatizing your resin.

Daylight Integer – What Is It And Why It’s Important?

Different plants need different levels of light to grow and mature properly. Cannabis has a very high light requirement. Greenhouse tomatoes have a high end of 32 moles. Cannabis starts there and goes up from there to maybe 40 or 45 although there is disagreement on top levels.

I did some rough calculating and found I was over 65 moles and a  light bulb went off! I was way high on my DLI even though my PAR readings were in the sweet spot. That would mean either lowering the light intensity or the hours lights are on. I have tried 11 on and 13 off lighting and it seemed to work just fine. Some run 10/14 but I have heard it lowers yield and speeds up maturity. Since things were already finishing too early it did not seem like a good option.

I am not a scientist but that doesn’t mean I can’t have a theory. So here goes. I believe the excessive light levels forced my plants to mature faster than normal and that weed has a light saturation point. When a certain amount of light is reached they stop growing flowers and start to ripen them instead.

I would guess this level could be strain dependent. Sativas that grow near the equator can probably handle higher prolonged light levels tha indicas or indica hybrids. Just a theory which leaves the question:

How Much LED Light For Weed

I needed to find out how much LED light for weed was enough and how much was too much. Clearly just going by PAR readings alone was not going to cut it. There is so much crap on the internet it can be hard to tell who knows their stuff and who is talking out their ass.

Luckily I had a few reference points to go off now. When I started out I was using the standard 50 watts a square foot for HPS lighting. I wanted to replace a 1000w HID and heard LED was 30-35% more efficient so I came up with around 700 watts using 12 Cree CXB3590 COBs as a replacement wattage. So I hung two PLC 250s and a 200w timber and called it good. Those PLCs are good lights and they actually pulled about 270w if I remember correctly. Talk about bright. Headache bright!

My actual screen area was about 10 square feet so that worked out to 75 watts a square foot. Way above 50 w sq ft. How did I miss that? Well more is better right?

Stephen from HLG recommends 35 watts for his quantum boards and they are only slightly more efficient than my COBs. What was I thinking? Even using my total closet volume I was over 40 watts. He is a stand up guy and a straight shooter so I trust this number. Running a light company he could easily throw out a higher number to sell more lights. But screwing up people’s grows with bad numbers does not make return customers.

One of my favorite growers is Grand Master Level from B.C. He switched from 1000w HPS to the HLG 550 from Horticulture Lighting Group. He may seem a bit OCD about watering and flushing but you can’t argue with his results. If you want to see some amazing grows check out: https://www.grandmasterlevel.com/led-vs-the-world/

My point is he is running the new V2 boards which put out about 480w over a 4×5 area and pulling over 2 pounds per light so I can’t imagine needing any more than that in my space. The watts are only about 24 per sq ft but he runs CO2, has his environment dialed in and with a larger grow gets the added benefit of cross lighting but still way less light than I was running and his quality and yield are off the hook.

Using these points of reference I now know how much LED light for weed is enough and how much light is too much. So I am now running 450w in one closet and 500 in the larger one which is 2×8 or an elongated 4×4.

I would like to upgrade to quantum boards and specifically the HLG 550 because they are more efficient and give more even light coverage. Another reason that I want to upgrade is the spectrum. My COBs are all 3500k which is a good all around spectrum for veg and flower. The HLG quantum boards are 3000k which is better for flowering although it works in veg too.

The PLC 250 is no longer being made although it is a pretty easy DIY if you are into that. Honestly I found it wasn’t much cheaper when you have to build a frame. COBs were king until the quantum boards hit the market, but at this point my COBs are only slightly less efficient and are giving excellent results. So any upgrade for me will have to wait for the future.

So Can Weed Really Get Too Much Light?

In my opinion the answer is yes. Growers often think if a little is good more is better. It’s human nature. More nutes, more water, more light. We all fall into this trap at some point, myself included.

So how much LED light for weed is enough and how much is too much? I can tell you my par readings on top were 700+ but rarely exceeded 1000 umoles except on a few taller isolated colas where it hit 11-1200. Well within acceptable guidelines.

Most common knowledge says above 1000 you need additional CO2 to benefit from the additional light. It wont harm it but it can’t use it. However I found this to be untrue, at least in my grows.

I think the problem lies in the fact that daylight integer is not taken into account. So it isn’t just a case of par levels but also the total photons received during the light cycle.

Once a plant is saturated continually with an overabundance of light I believe it starts to shut down. No need to grow bigger flowers it’s time to make seeds. While we want buds the plant doesn’t care, its primary function is to make seeds and perpetuate the species.

HLG considers 35 watts per square foot to be optimal which doesn’t necessarily mean you can’t grow with less. If you are at that range and your par levels are on point you should be golden. Go much above 35 watts and IMO you are asking for problems.