I just scored a pack of Grim Bastard OG from Solfire Gardens. Pretty excited about this cross which is Biker Kush x Black Bananas. 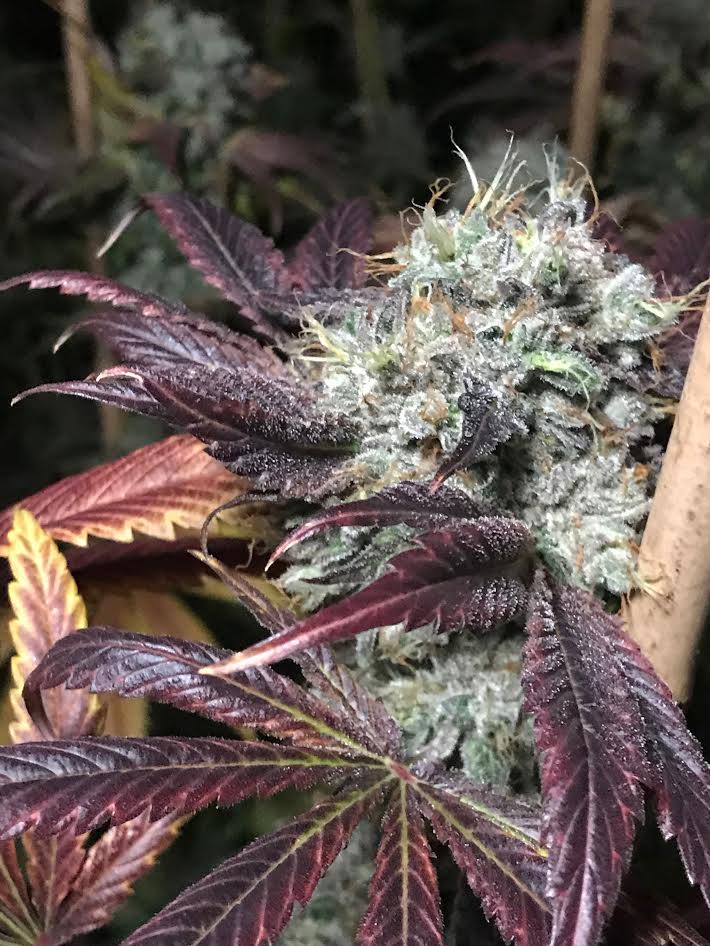 I have been running Karma Genetics Biker Kush for a few years now and she is a favorite of mine. So this will be great to cross with it, and if I am lucky the Black Bananas will add some purple coloring to the mix.

Several years ago I had a tough run with pythium and lost my male and one of my best cuts of her.  Luckily I still have one original Biker Kush and a bunch of fems I made. I want to try and revigorate this cut and cross it and my fems to a Grim Bastard OG male assuming I get some.

I’m getting ready to run Solfires Black Banana Cookies #9 cut and have really seen and heard good things about this girl so I may consider reversing her if I have to. 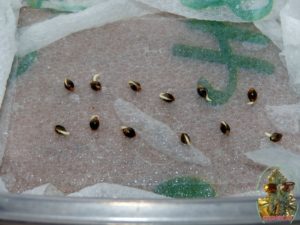 So after the seeds arrived I put them in a shot glass of plain water. In about 4 hours they had sunk so they went into a paper towel and a bit of H2O2 was added.

It is now 24 hours later and I am happy to report all 12 have cracked and have small tails. In a day or 2 they will go into some Root Riot plugs.

I dont like to let roots get too long before transplanting because they are fragile and easy to damage. So here is a picture of them 24 hours after they hit water. I like it when seeds show good vigor sprouting to me it’s a good sign. 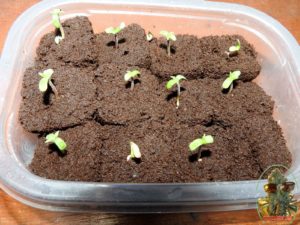 Seeing some great seedling vigor on these little bastards. Not even 72 hours after dropping them in a shot glass and they are off to the races.

There are only 11 because I dropped one while putting them in the root riots. I was on my hands and knees with a flashlight for over an hour but could not find it. RIP little seed! 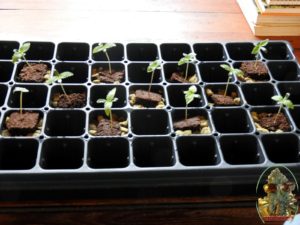 Today is day 7 and the seedlings are growing nicely. They are stocky and sturdy and now have their first 4 true leaves.

I will be transplanting them later this week into either rockwool or hydroton filled net pots.

They were given a light foliar feeding with New Millenium Lightning Start which is a kelp based nutrient designed to promote branching and root growth.

About To Take Off Day 14 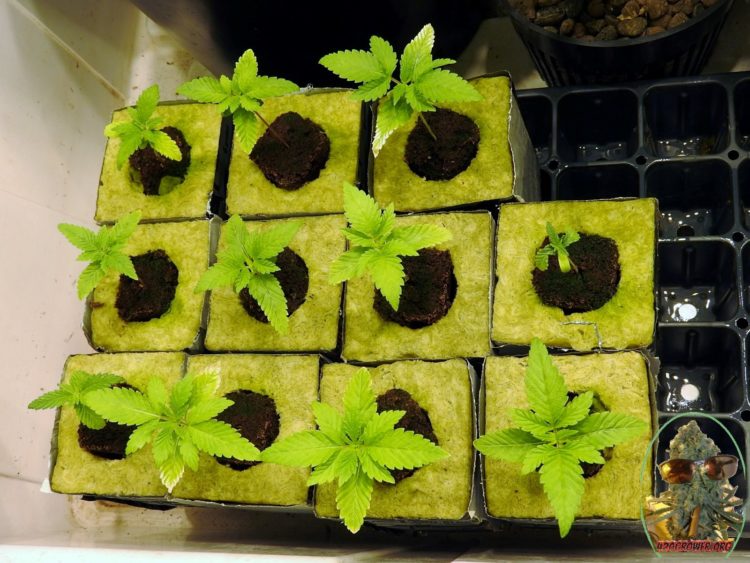 It has been 14 days since these seeds were first dropped in a shot glass. They were moved into rockwool cubes. There are still 11 but one is a runt and will probably be destroyed.

Biker Kush was the hardest plant I ever raised from seed. Seedlings are very tempremental and exhibit yellowing in spite of being fed with cal mag. They do grow out of it but initially growth is very slow. These are definitely similar. They are pale green but starting to darken up.

I placed them 36 inches below my HLG 300 quantum board and they got leaf burn from it. This is a powerful light but I thought 36 inches away would be fine but apparently not. It would not have happened under my COBs which is what they are now under.

So what you see on a few of these seedlings was self inflicted and not caused by the seeds themselves. I expect these Grim Bastard OG seeds will green up and start to take off over the next week.

Today is day 21 for my Grim Bastard OG. The runt was destroyed and now there are 10 plants left. Here is a picture of them in my grow tent.

Will probably move them out and put under 12/12 lighting later this week so I can sex them. After that I will take some cuts and reveg them. Theres plenty of time before I flower them but I dont have space for a bunch of males. If I find a really nice boy I may keep one for breeding. 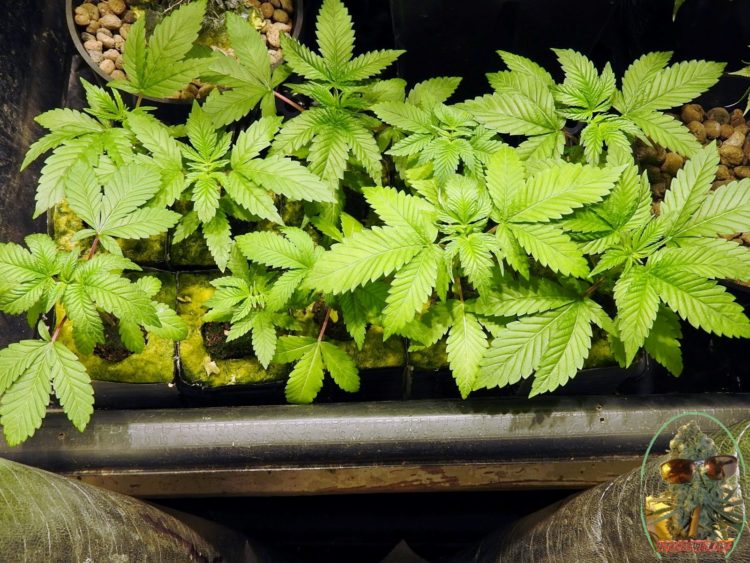 To be honest I lost track of the time but it is 2-3 weeks later now. I still have 10 plants. 5 are pretty tall and 5 are short. If I was to guess I would say the larger plants are boys. But I hate guessing which is why they are going under 12/12 lighting. In a few weeks I will have my answer.

I removed all leaves except for the top set. I want to try and get some lower branching going on. Also they are kind of crowded in that tray and I want to make sure airflow is good.

Thankfully the stems thickened up and are sturdy now. For a while some were pretty wimpy and I actually used some spare drip stakes to support them.

There are a lot of healthy roots coming out of the rockwool cubes they are in. There is a bit of browning but it is from the nutes and from air pruning. I have kept them in a tray and hand watered because they are smaller than my drip fed plants. With out the tray the blocks would soak up way too much water. So here’s a few picks for you:

These have been under 12/12 lighting for 3 or 4 days now and some nice lower branching has started.

This is a grow in progress and I will keep updating as I go. It will be a while before I actually flower these so you might want to bookmark this page and check back. Once they are in flower (about 2 months) I will be updating weekly, but for now updates will be less often.

It has been about a week now and everything has been sexed. There were 5 girls and 5 boys, There appears to be 2 main pheno types, short and tall. I think the shorter ones will lean more towards the Black Banana and the taller towards the Biker Kush.

I saved 2 males for possible future breeding. One tall and one short. The 5 girls will go into my veg closet in a few days. I will top them and try to take a clone off of each. I will let them reveg and hopefully they will be flowered in the next 2 months. Here are a few pics:

Time to flower my 5 Grim Bastard girls. Clones were taken and they were moved into one of my grow closets to flower. They are a bit smaller than I would like so I decided to give them another week of veg. So here is the first video:

During my veg I ran out of my

I always thought most veg and bloom nutes were pretty similar but I was wrong.

I substited Veg+Bloom and my plants suffered. They were not a healthy green, looked stunted and were showing deficiency symptoms.

So I changed to Jacks 3 2 1 and they improved but still were not right. Finally I got some more Summer Shift and within days they were turning a nice healthy green and starting to really grow.

I really set them back a few weeks by changing nutes and I would really encourage you to give New Millenium nutrients a try. They still are not widely available everywhere but you can get them on Amazon and they usually ship free.

This process has taken quite some time so I am going to split this grow up and do a 2nd post on flowering this girl. You can find it here: https://420grower.org/grim-bastard-og-in-flower/