Do you have a problem with dropping pH in hydro? Whether you are in DWC, flood and drain or other recirculating system you need to know how to correct it. Most growers will reach for the PH Up but that may not be the best choice. 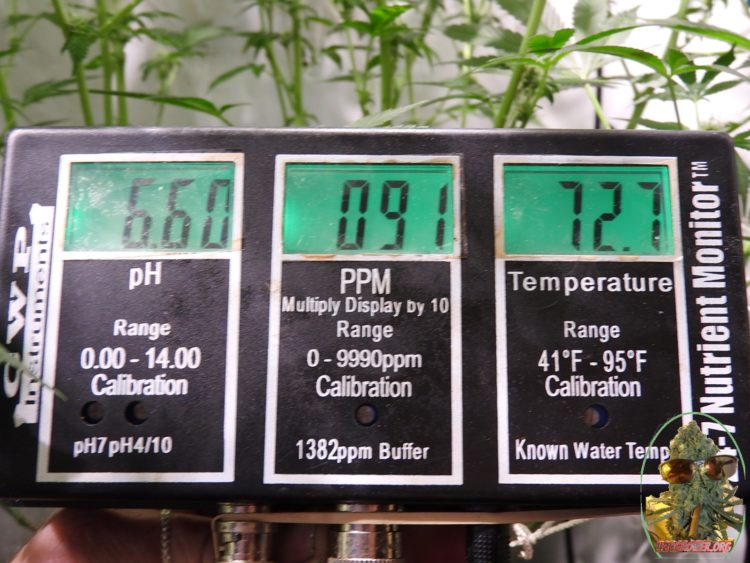 If your pH is dropping like a stone as mine was there are other issues coming into play. This is especially true if it keeps going down and you have to keep adding it every day.

There are several reasons for a dropping pH in hydro. Here is a link to an article that lists some of the common reasons
https://plantprovider.com/why-ph-drops-in-hydroponics-and-what-to-do/

I think a bit of background information on my hydro system might be in order. Most are not familiar with a SIP or sub irrigated planter and those that are, probably have not seen one that recirculates and runs 24/7. But mine does and works very well.

You can read more about it here: https://420grower.org/diy-sip-grow-system-for-cannabis/

So my first trial runs went great. Stable pH, great plants and no issues at all. Then the shit hit the fan!! LOL

Day 28 Dropping PH In Hydro-Issues In The SIPs?

Okay it is day 28 and the plants are doing just fine. In fact I had to pull one of the Animal Cookies tops down and to the side because it was squished against the light. My only issue is falling pH.

Normally as plants grow and use nutrients it will rise. Mine has been dropping. Everyday I bring it up to 5.8 and the next day it is down to 5.4 again. I dont know if it will continue to fall if left alone but I do not want to see it lower than 5.6.

So first of all it is common for pH to fluctuate in hydro. If you use RO water there are no natural buffers to keep it steady. That can cause pH drift. Some people say a Pythium infection can cause dropping pH in hydro. However Pythium is pretty rare in coco even if it is kept saturated.

I thought the coco would act as a buffer but since it wicks water up from the bottom there is not much exchange of nutrients. So the conclusion I came to was it must be a lack of buffering that causes the problem.

The first thing I did was recalibrate my nutrient monitor. It was dead on so the problem was not due to a faulty reading.

The next thing I did was change nutrients from Green Planet to Canna Aqua Flores. I am happy with the Green Planet but I was not sure if there were any buffering agents in it. Canna Aqua is very stable and buffered. It is designed specifically for recirculating hydro with inert media like growstones or hydroton. It has proved to be very stable for me in the past.

Well the nutrient change made no difference so it led me to consider Pythium, however unlikely or the solution needed more buffering than it had.

PH UP What Is In it?

Most pH up is a form of lye. You could use sodium hydroxide the stuff you pour in drains but since it also adds sodium it is not used much to raise pH. Most commercial PH UP is potassium hydroxide. Potassium is a necessary nutrient after all. So it adds potassium and the hydroxide part turns to water.

The problem was I had to use it every day. It would naturally raise my PPMs but the real problem was coco holds potassium and in doing so there are less exchange sites to hold calcium and magnesium and that is not good.

How To Fix Dropping PH In Hydro

Most hydro growers will use RO water in their systems. Tap water may contain reasonable amounts of calcium and magnesium to act as buffers but can also contain contaminates like lead.

I have heard the large particle size of calcium in tap water makes it unavailable to plants. Problem is although RO water is clean it has no buffers. Buffers are what keep pH stable.

I dont think using PH Up is a good idea, especially in coco. Most nutrients already have plenty of potassium and we add even more if we use bloom boosters. If your pH keeps dropping and you have to constantly use it your nutrient profile will get out of whack. There is a better way to deal with a falling pH and stabilize it.

Kalkwasser To The Rescue

Kalkwasser is German for lime water. It is calcium hydroxide also known as pickling lime. Cant make corn tortillas without it and it is non toxic. It is eaten, and fed to fish, corals and inverts where it is used to add calcium and raise alkalinity in reef tanks. It is not caustic like regular lye either. Notice your bottle of PH Up probably has a warning label on it.

It will bring your pH up and its buffering action will help keep it stable. Calcium is something plants need especially in coco and in hydro it is much less available than in a garden. There are all kinds of biological and chemical reactions that make it available there but are lacking in our grow rooms. Best news of all it’s cheap and way cheaper than that bottle of PH Up you are slinging around.

If you mix a teaspoon in a gallon of water you will have about 2000 ppms of calcium to buffer your reservoir. In my 20 gallon reservoir it adds 100 ppms and brings my pH up a full point. You can mix less but if you add more than a teaspoon to gallon the excess will precipitate out of solution.

Never add it directly to your reservoir, always dilute it first and you do want to use it soon after mixing it up. A little goes a long way and a pound of this stuff would probably last a small grower a lifetime. Not bad for $13-14!

Even if you dont have a problem with dropping PH in hydro I still think Kalkwasser is a better alternative than PH up.