I am going to be flowering my cut of Death Bubba which is a very popular strain up in B.C. Everyone wants it and everyone says they have it but most are selling a fake.

How I got this cut is a long story that I would rather not go into but lets just say it is one person removed from the original grower and 100% authentic. Grand Master Level popularized this strain and it has been his signature variety for years.

The exact genetics are unknown but it is a Bubba Kush cross probably with an OG. A sample was sent out but they could not profile it only saying it was a Sativa and very rare. Yes true OGs really are Sativa dominant. They are tall, upright and with long node spacing which is just the opposite of an Indica. This is no Bubba Kush which is a short plant.

The Death Bubba is tall with an upright growth habit and makes golf ball sized nugs. There are some purple leaves on the buds. She is very frosty and yields well and finishes in about 9 weeks.

The strain is listed on Leafly but the information provided is wrong.

It was not bred by the gentleman mentioned. It is not Death Star x Bubba Kush and when the dispensary listed tried to buy it from the original grower and cut holder they were refused. So like so many strains they either created or renamed an existing strain calling it Death Bubba and somehow convinced Leafly they had the real cut. A lot of people seem to like it and it is probably good but it is not Death Bubba. Let’s move on shall we?

I received a clone of Death Bubba back in mid January and here she is: 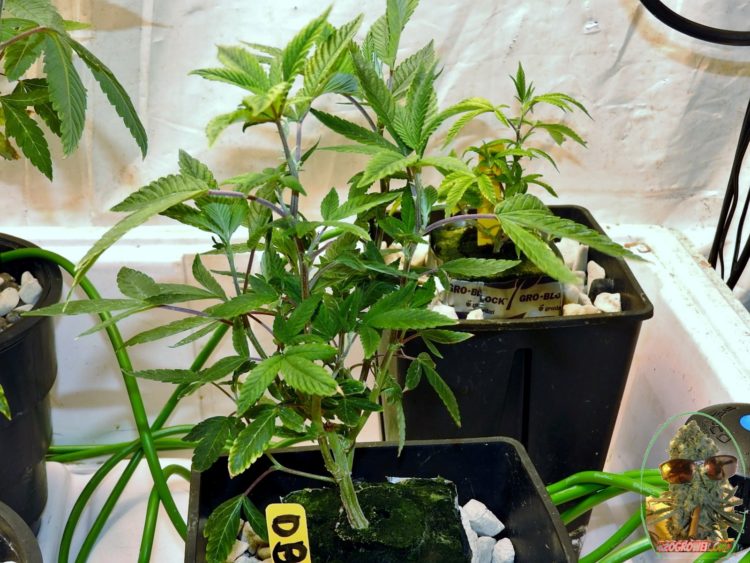 Fast forward about 5 weeks and here she is in veg. She is small but I was able to root a couple more clones from her. Now I want to veg her out and flower her.

The original clone mom has a lot of branches and should start to take off now. The other 2 clones are still pretty small and probably wont get flowered this round.

So right now it looks like I will only be able to flower one of them unless the small one explodes. Both plants are in rockwool blocks buried partly in growstones and watered with a top feed drip system. Running a modified version of New Millenium nutrients. By that I mean I am running flowering nutes with added cal mag. I want these girls to grow and higher P K levels should help them grow more roots.Lighting is a HLG 550 and fairly high up right now but cant wait to see them pray and reach for the light!

I have heard that DWC provides the fastest veg of any system although its hard to imagine anything faster than my DIY Aeroponic system. I want to get these girls as big as I can, as fast as I can, but I will be vegging them for however long it takes to get a full canopy.

These buckets are cheap and easy to build. They are reverse flow DWC. By that I mean water flows in the bottom and then upwards coming out on top. I have had this idea for quite a while because it seems RDWC growers are always having problems with roots getting sucked into the bottom drain. I think they are less likely to be a problem with this system.

Turns out there is a system on the market called slucket buckets that use this same principle and you can buy these buckets on Amazon.

I am not going to be using any airstones in this system. Heath Robinson proved years ago that flow, waterfalls or flooming can provide as much dissolved oxygen as air stones without all the noise. I have a backup skimmer pump in my reservoir that I can run and it produces a ton of aeration silently.

In addition to not using airstones I also am not going to use a chiller. This particular closet does get warm and water temps can get to 72 or a bit above so I am hoping I wont run into any problems with pythium. I added about 3/4 cup of Serenade to my reservoir as a preventative.

It is relatively inexpensive so definitely worth using as a precaution. I may discontinue it later in flower because it does create some foam in my reservoir and I may decide to use pool shock and run a sterile system.

One interesting thing about this DWC system I noticed was my water temperature stayed cooler than I thought it would. This may be due to the fact that it is continually recirculating.

When I  would feed a couple of minutes every few hours the temperature would climb. Eventually if I did not add anything back it would inch up towards room temperature which is about 82 degrees.

Now by the end of 12 hours it gets up to about 72 for a few hours but then it cools off again at night starting out at around 68 which is perfect. So the heat build up I was worried about is not happening. My guess is moving water does not build up heat as fast as standing water does. It may also be possible some evaporative cooling is going on.

I do want to point out that it is winter and come summer I probably wont be able to run DWC in this closet without a chiller. I have not decided whether I will buy a chiller yet. A lot depends on the results my new system produces. If you are running DWC and want to run in all seasons you will want to use a chiller otherwise you may end up with pythium root rot.

My diy sluckets work fine but I have decided to remove the Death Bubba from DWC for now. I am testing them with a GG4 instead. I want to start the Death Bubba with a fresh healthy plant and no rockwool block.

These girls were hurt pretty bad from a bunch of neem oil sprays used to kill spider mites. It has taken about a month for them and all m,y other plants to start putting out normal growth.

The Death Bubba is just too small to flower right now. So they were taken out of DWC and repotted into a chow mix of 75% growstones/hydroton and 25% coco. They are only just now starting to push roots out of the rockwool blocks they were in.

Growth has been slow. Bubba Kush is definitely part of this cross and is rumored to be a slow vegger. I cant say whether that’s the case or the slow growth was caused by the neem. They seem reluctant to leave the rockwool and get into the growstones so I decided to repot them into 5 gallon containers. Hopefully the roots will hit the coco and these girls will take off.

I am starting to use my aeroponic cloner and move away from rockwool altogether. The plant is to go directly from clone to net pot. I had a GG4 in with them that was pushing roots out of the net pot it was in so it went into the DWC bucket. It was in a root riot not rockwool and it definitely did better.

Here is a video of what Death Bubba looks like following a leaf strip. Grand Master Level has been rocking his original cut for years and it is the real deal not some renamed strain on Leafly.

Death Bubba Gets A Hair Cut

My plant was moved from DWC to a chow mix of 75% growstones and 25% coco. It has gotten healthy but she is still small and developed a lot of leaves and small branches lower down. Most will be too low and will never get enough light to develop properly.

I want to flower this girl in the next few weeks so I decided to give my Death Bubba a haircut. I am hoping this will not set her back too far and she will put her energy into growing some taller tops.