Time to start a new Death Bubba SOG with 24 plants under HLG quantum boards. My last sea of green grow was a test grow with several strains to see how they would do in a SOG.

I Made A Mistake!

Turns out my pots were mislabeled and what I thought was Death Bubba was actually Tropicanna Cookies. I thought it looked different but the pots said Death Bubba and I did not even think I had any Tropicanna cuts going at the time. So following are some Death Bubba bud shots that were really Tropicanna from my other closet that finished a week later. Still awesome plants even if mislabeled! 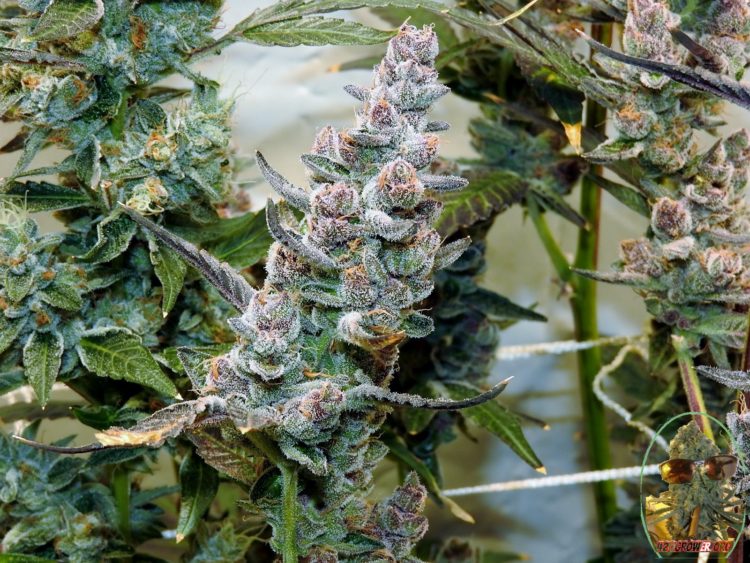 This is Death Bubba at 60 Days: 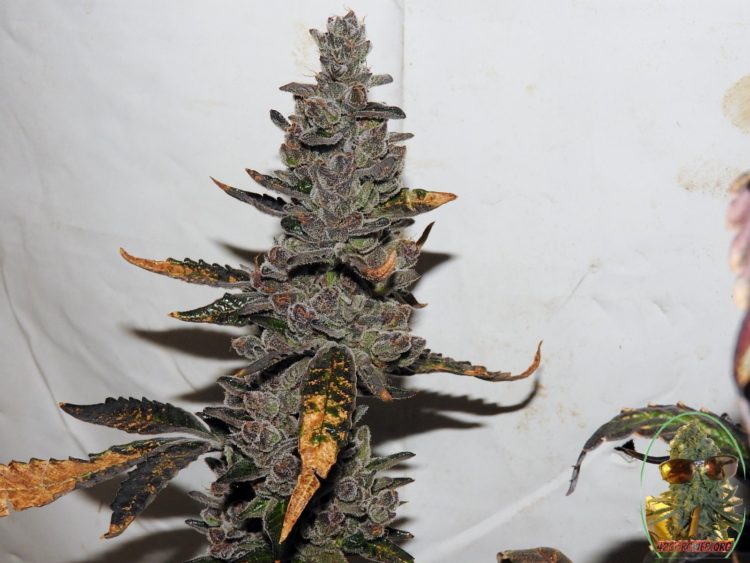 They all did very well but the Death Bubba was the star of the show so I am going to run her again. It is much easier to grow only one strain in a sea of green. That’s because the canopy tends to be more even and uniform. Also everything has the same maturity date

My plants are in 6 inch net pots filled with growstones. I am running a flood and drain system made from inexpensive mixing totes. My closet is 2 x 8 feet so it takes some creativity to get it done because standard flood tables wont fit. Each tote is 2 x 3 feet which works out well leaving a foot on either end for fans or heaters or other grow gear.

I will be running CO2 in this closet. It is not sealed but it is pretty tight and I get about 2 weeks from a 30# tank. I only run my exhaust fans at night and except for the summer months I can run it year round. If you want to know how to run CO2 in a grow tent or closet I explain how to run CO2 in an unsealed room here: https://420grower.org/adding-co2-in-a-vented-grow-room/

One of the great advantages of sea of green growing is the lack of veg time. Some growers start the flowering cycle as soon as clones are rooted. But I will give these a 1 week veg because I want to give them a bit more time to grow roots.

Going to flower this Death Bubba following treatment for root aphids. One side looks pretty good and is getting tall but the other side is smaller and was hit harder by the aphids and probably the root drenching too. I believe they are gone but will give one more preventative treatment with pyrethrum in case there are any survivors.

As the world continues to battle coronavirus I have been fighting a battle with root aphids. Hopefully I have won. Because this is a SOG some plants were getting large and needed to be flowered. However some plants remain small likely because they sustained more damage from the root aphids. Root drenches are the only real way to fight these buggers and unfortunately they can be almost as hard on the plants as the bugs themselves.

Today is day 14 and the plants are flowering. Flowers started to show a few days before and it is always a nice sight to see. These plants were treated for root aphids with several root drenches which is hard on them.

Happily they are recovered and new growth is looking good. One side has bigger plants than the other but that was caused by smaller clones affected more heavily by the drenches. They are eating and drinking well so hopefully all root aphids are gone.

These plants are looking pretty good all things considered. It looks like the root aphids are gone. They are eating and drinking well. Buds are stacking nicely and expanding.

Please ignore the video caption that says it is day 14. It is day 20.

Stretch should be over soon and I have gone through the plants and removed lower branches and some fan leaves too. Death Bubba likes to make a lot of lower branches. Many of them are small and wont get much light. So I remove them so the plant can send its energy to the top buds.

Liking what I am seeing. Stacking is very nice and also tight. Buds are about an inch apart on the main leaders. Even the smaller plants are showing the same great cola development.

Things are moving along nicely. I have been running Jack’s 3 2 1 and plants are doing well on it. Also running CO2 but at a lower level of 800 ppms.

Moving right along here. We are at about the half way point on this grow. The Death Bubba is stacking really well with many buds about an inch apart. Since they will be swelling up I soon expect to see solid colas looking like bud sticks.

Something is wrong with these girls. Trichome development is off. Normally Death Bubba is very sticky and full of trichomes especially at this point. I think the root drenches may have delayed development.

I will run her longer than the normal 63 days and am adding some UVB light to the spectrum. Hopefully this will give her a chance to increase and ripen her trichomes.

Today is day 63 and normally I would be harvesting my Death Bubba. Because of multiple root drenches these girls will need to go longer. So although I believe they were eliminated the drenches definitely affected growth. It would have been better to give them more time before flowering.

The drenches affected trichome and resin production and the buds did not size up like they normally would. After some online research I discovered others experiencing similar problems. Some blamed the Orthene or other products.

So this is a less than stellar grow and it will need longer to finish. The UV bulbs seemed to help with trichome and resin production and also speed along maturity.

So in the 2nd part of this video I go over what I have done to eliminate these little bastards. A clean clone and veg tent is vital to having successful grows. It all starts there. If those plants are healthy and clean there wont be any root aphids brought into flower and assuming the flower closets are clean there wont be any at all.

So the closet was sterilized with ozone and sprayed down with acephate. My mother plants were removed along with everything else in there. The moms will be destroyed even though they have been treated and look healthy.

Everything else was treated with a drench of Botanigard and Orthene and Spectracide. That should get them all because these plants were small and easy to thoroughly drench. I have fresh clones from all the moms I got rid of. They are clean and have never been exposed to root aphids. Once the clones I have are all moved into flower I will sterilize my tent again and put them in. So I will have only clean moms from here on out.