Time for another Black Banana SOG. I have 17 of the BBC in a 2×3 tray. The other tray has 9 Tropicanna Cookies and 5 test plants. The testers are a Koffee and 4 Platinum Candy.

The Black Banana SOG will be a good producer and the BBC is a favorite of mine. The Tropicanna cookies is another long time favorite. I am also running 5 test plants. One is Kaya’s Koffee and there are 4 Platinum Candy. I have not grown either of these strains but have heard really good things about both.

Starting this SOG out running Dutch Master Commercial Edition and so far so good. I started with their standard root feed because I was unfamiliar with their line and quickly realized I needed to switch to their aggressive feed schedule.

If you are looking for good clean nutes without dyes or heavy metals you can give them a try. Read my Dutch Master Nutrients Review: https://420dotcom.com/dutch-master-nutrients-review.html

They only really sell from their website. Anything you see on Amazon is either their old Gold Line or is very overpriced. You can order Dutch Master Nutrients here: https://dutchmasternutrients.com/?rfsn=4449097.f8ec40
Use discount code 420GROWER10 for 10% off.

Today these ladies were flipped over to 12/12 lighting. They were rooted clones to start and were given about a week of veg. The Black Banana makes large leaves so she was leaf stripped just before switching over. The other plants mostly had lower bud sites pinched off.

The Black Banana is under an HLG 550 but it was dimmed to 285 watts to match the Tropicanna and test plants under the HLG 300. They have plenty of light and it is summer so I want to keep temperatures down. Also with a sea of green lights do not need to penetrate as far into the canopy which is nice. 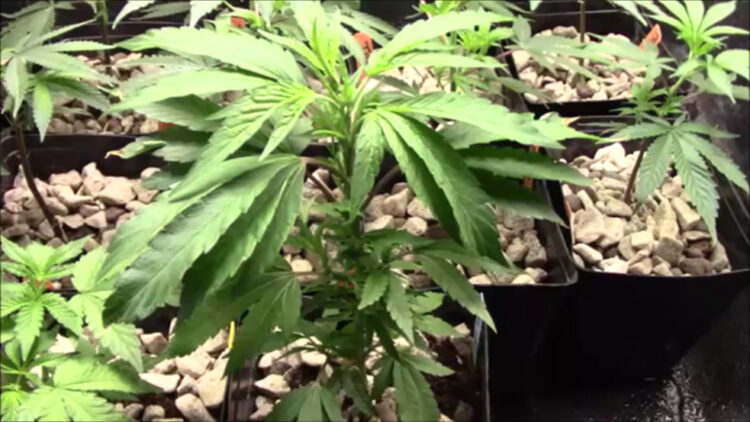 This plant above is Kaya’s Koffee from Pacific Northwest Roots. I only have 1 girl and a boy I saved for possible breeding. I am pretty excited to see what she does. At the Seattle Cannabis Cup in 2014 she tested at 31% and High Times moved her to their Worlds Strongest Strains list.

Today is day 7 and flowers are beginning to appear and it is especially noticeable on the Tropicanna Cookies. The Black Banana is filling out nicely and although plants were cleaned up and stripped on day 1 you would never know it.

The Koffee is a short strain and looks like it was not 100% revegged judging by the large leaves it produced. Most of those have been removed now.

The Platinum Candy has 2 nice plants and 2 that are quite a bit smaller. Not expecting much from them but you can never tell.

My Black Banana SOG is taking off! Plants are vigorous and still stretching. The Dutch Master nutrients are performing well too. Very stable and without some of the negative side effects I often see from other brands.

The Tropicanna is also doing well. Of the 4 Platinum Candy only one really looks like it might be a keeper. The Koffee is less than impressive at this point. It has been through a lot but I know the potential is there. That’s why I call them testers!

The Black Banana is really taking off and looking good. The Tropicanna is really tall this time and I pulled some of the taller colas to the side.

The Platinum Candy has one really tall plant and 2 shorter ones. There was a runt which I removed. I doubt I will be running it again unless it really surprises me.

The Koffee was in coco instead of growstones and I forgot that. It was overwatered and stunted but I raised it up and now it looks much better.

Black Banana looks really good. The Dutch Master nutrients are doing a great job. I can feed at higher ppms without leaf clawing or tip burn that I had with other nutrient lines. Also I can see purples showing up at least 2 weeks earlier than normal especially in the Tropicanna.

The Platinum Candy is very tall with large leaves. There are 2 shorter ones not doing much right now but the large plant is very frosty and may be worth a regrow.

The Koffee is interesting. Two different looking plants from the same mom and 2 weeks apart now. The order one showing effects of monster cropping or incomplete reveg along with over watering. The other that is 2 weeks behind has a more OG like structure. Curious to see how they both turn out because I will be starting a breeding project with the Koffee strain.

Here are some mixed SOG testers underway. Some tried and true strains like MAC 1 and some brand new ones including GMO and Animal Cookies. I have half the grow at 35 days and just added some clones from seeds I am testing at day 7.

Lighting is from HLG with a HLG 300 and a HLG 550 in a 2 x 8 closet with a growing area growing made up of 2 2×3 mixing tubs using flood and drain with growstones.

Plants can grow quite differently depending on training methods and the plants genetics. A plant that branches heavily will not be a good choice for a SOG. That is why I do SOG testers. I am still fairly new to growing in sea of green and need to see which of my strains will perform best in this type of grow system.

The MAC 1 to me is the perfect plant for a sea of green. It has a narrow upright profile and is sturdy and pretty much free standing. Even its side branches are sturdy , upright and held close to the main stem. 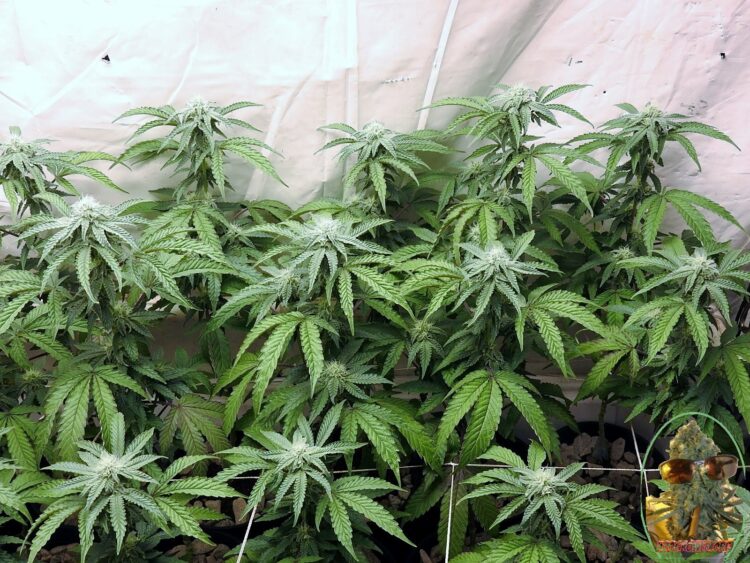 After a bit of juggling things around the new seed testers are on one side and the other plants are in the other tote. I had an issue with some of the larger, older plants getting underwatered which was corrected. But that allowed for some nutrient build up so some leaves have some tip burn.

In this video everything is sorted out and I talk about the genetics that went into making some of these plants. All the seed plants are in 1 tote and all the clone only plants are in the other.

The GMO appears to be a good SOG strain. She is upright and tall and grows well as a single stem plant with minimal lower branching. She stacks buds very well along the stem too. The only thing I dont like about her is the longer finishing time than many other strains.

Probably the most important factor for me was the fact you can use it in flower if you find an infestation. Root aphids are a serious pest and I have no problem taking a nuclear approach and using chemicals on clones or young plants. But I wont use them in flower because they are systemic and will be in the buds. This is not a problem with Botanigard.

I made a video explaining what I am doing and how to use Botanigard 22 WP. To me everything starts in veg. If those plants are free from bugs you will have a good grow. If not you should wait until they are clean because options for treatment are less in flower.

BotaniGard Review And A Peak In My Veg Tent

This product comes in a liquid and a wettable powder form. I chose the wettable powder because it is cheaper. Same product but lower price probably reflects that its easier to ship and also it is eligible for Prime while the liquid isn’t. 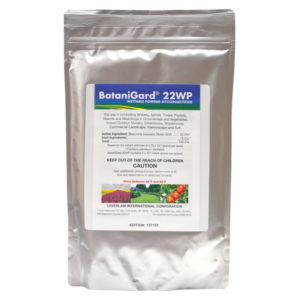 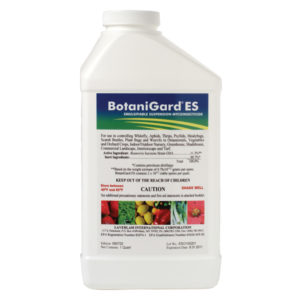 How To Use BotaniGard And Get Rid Of Root Aphids

Root aphids are a serious pest in cannabis. They can mimic nutrient deficiency symptoms so they often go unnoticed until you are well along in your grow and options are limited. This is what happened to me. Things just were not right but I couldn’t put my finger on what the problem was.

So after the grow was over I started examining roots and I found some. They can be hard to see and I did not find any in the first couple of plants I checked. But the third plant definitely had them. Not a lot but it was enough. So I knew I had to take action.

I had them once before and drenches with Acephate and IMD got rid of them so that is the route I went again. Botanigard was not on the market back then and although I now knew about it I decided to skip using it because it was expensive.

That was really stupid. Root aphids generally dont kill a crop outright but they lower yield and quality. So if they lower your yield by even an ounce then treating your crop with a dose of Botanigard is well worth it and pays for itself easily.

Everything Starts In Veg

For good harvests you need healthy plants. So cloning and veg is all important so you dont bring pests into flower. I am pretty sure I got rid of my root aphid problem. But just to be safe I decided to assume there were still some there.

I had issues with mother plants that looked like calmag deficiency but adding calmag did not correct the problem. Epsom salt foliar sprays did not work either. I am pretty sure my moms had root aphids. Occasionally they do crawl up the stems so they could have been on my clones. To make matters worse I was growing them out in reused coco.

Those original moms are all gone. Before I trashed them I took fresh clones and started them again after treating their coco. Now in another area I am rooting clones from these treated moms. So all my new mothers will be bug free.

Because root aphids have a short 5 day cycle it is necessary to use multiple treatments to get rid of them and prevent resistance. Nothing is 100% effective so you need to get any survivors with something else.

The next step for me will be sterilizing my clone and veg tent. I use ozone for this. It is a gas and can penetrate areas you could never get at by scrubbing. If there are any root aphids or their eggs they will be killed.

All my growstones will get placed in an oven in turkey trays at 350 degrees for an hour. That will make sure my media is sterile. I love growstones and prefer them to hydroton. Since they are no longer made I want to preserve them. If I was just using hydroton I would have tossed it and started with new stones.

Have A Treatment Plan

All my plants were treated with BotaniGard. They will get a drench with Spectracide as a quick knockdown in a few days. More Botanigard 5 days later. Then a drench with IMD and acephate followed by another dose of Botanigard. By then everything should be gone. Most of my clones and seedlings will be flowered at this point. My new moms will probably get flowered. The tent will be sterilized again and empty.My newly rooted clones will go in as replacement moms.

It is a lot of work to get rid of these little bastards but I think it is worth the effort. Do it right once they are gone. Skip steps and they will be back.